An End of an Era 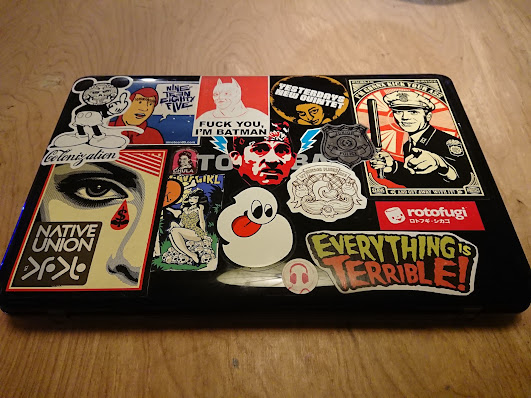 After nearly 13 years of service, as of last night I have retired my trusty "refurbished" Toshiba Satellite laptop. Sure, it's just a machine, but I've accomplished so much with it I decided to write a nice little send off.

Purchased as "refurbished" for $250 in 2010, this was my first laptop, intended to be a portable production studio which included photo manipulation, logo design, video editing, sound recording and editing, and website building. On top of all that I read comics, played games, downloaded all sorts of stuff, ran all sorts of software, and used her as a primary machine for a plethora of various tasks.

So much work has come out of this faithful machine, so much. I've replaced the battery about 3 times, and she's even had a grand reset a few times as well. The measly stock 240GB HDD would fill up fast very often, so in 2016 she got a SSD hard drive replacement "Brain Transplant" which extended her life that much more, running apps and transfers at lightning speed.

She was set up and tuned to do anything I needed. Even when I purchased a Macbook Pro a  few years ago, she stuck around, able to convert files and run specific software I didn't yet enable on any other machine. I wanted to retire her then, but she was still so useful, so she stuck around and popped up as needed.

At the beginning of this year I committed to building up a newer Windows machine, and little by little this new machine has been taught to do everything the old laptop did, aside from a few obsolete programs that are no longer attainable or supported. And now the time has come to where using the new machine is now preferable to this one.

She held on a long time, even after her sound card went out, and the screen become color-glitchy at various angles, and when most of the USB ports were no longer dependable for file transfers. She kept booting up reliably. But the time has come to let her rest. I've cloned her SSD hard drive to a much smaller one (so I can retrieve the 1TB SSD and use it somewhere else), so if ever needed again she'll boot up. I've removed her battery, discharged any languishing electricity by pushing the power button, sealed her up in her trademark sleeve, and stashed her deep in the back of the mega-desk.

It's truly an end of an era. The machine that was nearly a mascot for the Phillie Mansion and beyond, the one I took to Brooklyn and back, the one that spearheaded so many creative endeavors is finally finished.

This is why I find computers so fascinating. When they're tuned correctly you can do damn near anything you need to, especially make a living. On this machine alone I've completed so many projects that have paid my living expenses thru the years. Student loans have been paid off with work done on this machine. A dependable machine can help you finish your work and then take it to the next level. And if you take care of it, it'll last as long as you need it to last, hence above. But, I've also been a poor artist for much of this time, you take care of what you have because you can't just go out and buy a new one. And that's why when people decide to get rid of computer after a few years, they see trash, I see so much potential. I like to take care of my machines and they take care of me.

Well, it's time to move on to some new hardware.

*I've put this post on this site because it was only fitting. This site is as old as this laptop; indeed much of the work on this site was done on this laptop. But I will no longer update this site, save for other specific news/posts. Subscribe to my Substack to keep up with current me.