At the beginning of the year frequent collaborator and friend Lee Lawson asked me to illustrate and art-direct his latest album release cover art. He filled me in on this project that has been in the works since 2012, a video-game-music-sampled beat album, and he wanted me to create something that spoofs the  iconic as the cover art for the US version of the NES classic Mega Man. Like, the first Mega Man, Mega Man 1. I looked at him and asked, Are you sure? Have you seen the original art to the first Mega Man?

He proceeded to egg me on to just do it and see what I came up with. Well, after some sketching and then the adding of color to paper I have to say it wasn't such a bad idea after all. Take a look: 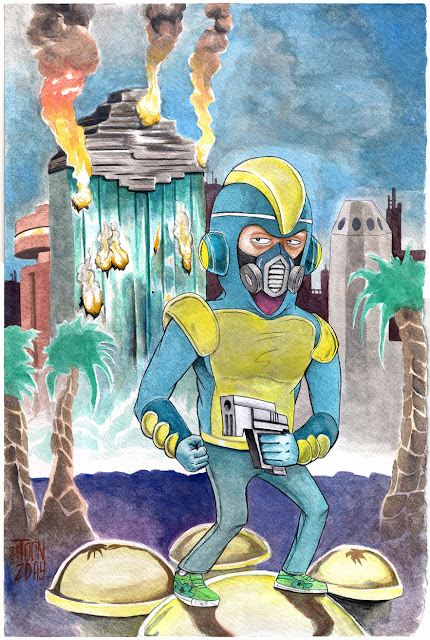 This is gonna go right in the center of the spoofed cover, just the like in the art above. I  intend to match colors and a similar design to hopefully capture the feel of that old box art, one that raises the question Just what in the hell is going on?

Lawson tells me he's in the post-production stages of this project, mixing and mastering, and he said he's gunning for a an Autumn release. You heard it here first! I don't think he's even leaked this to his followers yet. He said he's gunning not only for a digital release, but one on vinyl as well. Imagine a design like this on a 12" sleeve. I'd love to see that! Stay tooned.