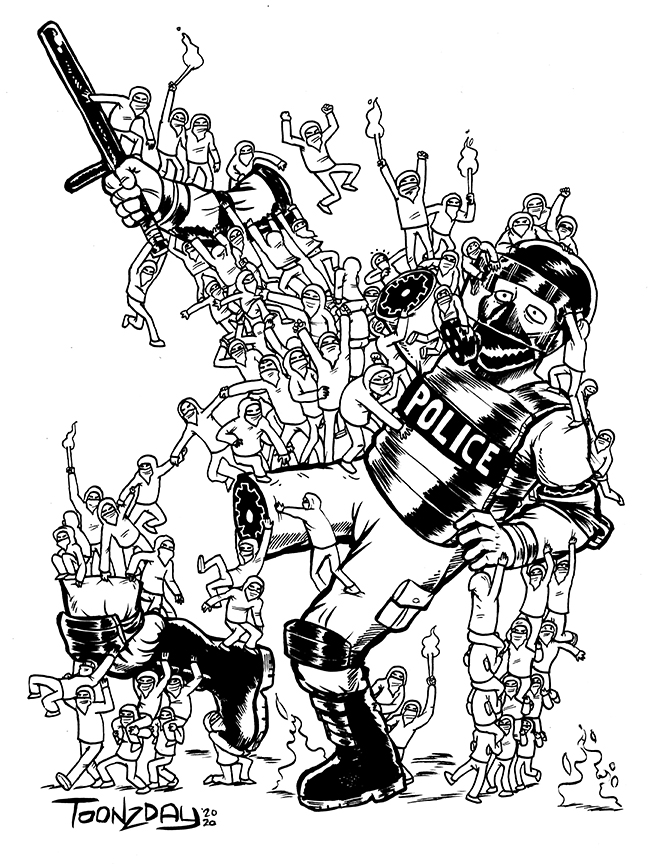 Posted to my Instagram June 1st, 2020:
I drew this yesterday as I ruminated over the unfolding events this past week, this past month really. Every time something like this happens I become livid, infuriated. All this senseless death, whether in the street or busting down the wrong door, it has to stop! I'm sick of it, and the people are sick of it too. I don't think it's enough to just implement a few changes, we have to dismantle the system itself. We tried marches, kneeling, voting, policing our own communities, incorporating new technology, but the violence against people hasn't ceased in the least. The whole system is rotten and does not serve who we're told it is meant to serve. We must think of a new way to peacefully and compassionately maintain the rule of law among citizens, but before we can begin we ALL must acknowledge that this doesn't work. It's ridiculous! There's no excuse, none. I stand for justice for George Floyd, Breonna Taylor and the countless others who have lost their lives senselessly to law enforcement officers and their vigilante counterparts. Black Lives Matter! Fight the Power! Dismantle the System! Rebuild for the Future!

And now, as I type this post, the first officer charged in the death of George Floyd has had his charge up'd to a more serious one, and the other 3 officers at that scene are being charged as accessories. All the protesting across this country (and others) is finally working in getting these officers charged for their crimes. But the work is not finished yet. Oh no. Far from it! Now it's time seek justice for all the others. And that justice lies not only with charging the guilty officers with their crimes, no. It will come once we bring down the racist system that has allowed all of these heinous crimes against American citizens to persist through the decades. The fight to dismantle the system has begun.

Never before has our society been inundated with so much evidence of police brutality, both before these protests with new stories coming to light, as well as during these protests as we all watch armor-clad, helmeted soldiers of the empire march onto the people "they're sworn to protect", cracking heads, macing faces, and popping off tear gas canisters. We're all watching in abject horror as our feeds get fed with video after video of such atrocities as a defenseless homeless person getting shot in the face, as a 75 year old man posing no real threat gets forced to the ground hitting his head, as an off duty cop rages at a little white girl showing her support for BLM with her homemade posters. It's becoming increasing clear that those charged to protect and serve our society have a predilection of antagonizing minorities while unquestionably protecting the rich and the property they hold. And this new widespread awakening of the American public makes me very hopeful for the future.

This type of thing has always been known by me and my peers, by my community and other adjacent communities. We've all known police are bastards and you just want to avoid them at all costs. We've all understood they are never really here to help you, and if given the opportunity just might hurt you, either physically or legally or both.

That's right. My peers have all realized that the police can legally fuck up your life. Whether it's through a trumped up marijuana charge that ends up costing you months of your life and thousands of dollars, or if they roll up on you and think you're pulling out a gun with you paying the ultimate cost. It's real. It's been a reality for decades. And for all those decades we've been trying to tell our white peers that this is real but we kept getting met with groans and eye rolls, suggestions to not resist arrest, or you shouldn't do the crime or it's few bad apples etc. (although our poor white friends did understand being financially raped by the system).

Now the year is 2020, and with camera phones as ubiquitous as they are it is becoming abundantly clear to our white peers and others around the world that the U.S. has a serious systemic problem with the police. And as our feed gets fed with protest videos and images of protest signs the overall message of FUCK THE POLICE is coming out strong.

As this thing has been unfolding, I've been reluctant to blatantly state FUCK THE POLICE, in this and other wording, in my feed because I have a friends and family that are police and I didn't want to alienate them. I did not want to come off as unsupportive of them specifically, even though I DO NOT LIKE POLICE. Well, I'm tired of pussyfooting around about posting the memes and mincing words. FUCK THE POLICE. DEFUND THEM. DISMANTLE THEM.

And to those police friends and family members who may be quick to tell me what a dangerous job they have or how they are one of the good ones and are fighting the good fight blah blah, just keep telling yourself what you need to believe to justify your career. In the end though, that's all it is, a career. I know you've worked tirelessly to get where you are, to earn your rank or whatever but it's just a job.

Maybe you should quit. Stand down. Retire. Hand in your badge.


People quit their careers all the time, many of which have higher stakes than yours, both in danger and in pay. I mean, come on, are you really getting paid that much anyway? Is it really enough to justify "putting yourself on the line" everyday? Is the pay really enough to cushion you when you accidentally (or purposefully) shoot and kill a person? Is it worth all the paranoia you're putting you and your family through all day and night as you worry somebody will break in, shoot you, etc? Cuz, realistically, that doesn't really happen much, unless you're the police raiding the wrong crib. Is it worth being the hardened shell of person you've become, seeing and dealing with the things you deal with on a daily basis? Do you really feel a deep satisfying fulfillment in yourself when you come home at the end of shift, are you happy? If you've answered NO to any of those questions maybe it's time to consider a career in LITERALLY ANYTHING ELSE.

Seriously, and don't give me that "I wanna help people" bullshit because there are plenty of careers that do WAY more to help people than the police. Do you feel like you're helping people when you or your coworkers prevent others from feeding the homeless at the park?

So quit. Nobody will think any less of you. In fact, it may be the opposite. I would actually be really proud of you if you handed in your badge. I would look at these crazy police brutality videos and at least sigh to myself that those certain family members and friends are no longer a part of such a violent, uncompassionate, and racist institution. Your mama and your grandma wouldn't watch the news with dread worried that somebody was gonna attack YOU at these protests. They would stop worrying about you in general. See? You'd be doing all of us a favor. GOOD COPS RESIGN.

And don't worry, you'll find another career, just pull yourself up by your bootstraps. 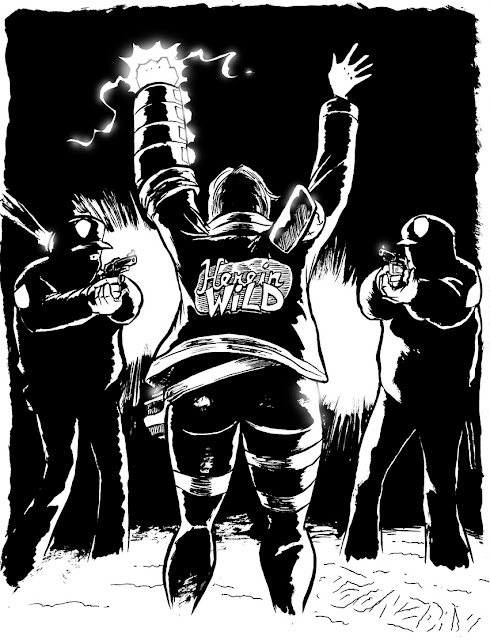 And I as I finish writing this piece, I've just checked the news feed to find more police fatalities have taken place, one of which was a young 18 year old security guard on duty that was shot in the back. So don't tell me that you're one of the good ones. Unless you're exposing the corruption of "your brothers in arms" or you're on your way to arrest any of the countless officers who have gotten off scott-free after murdering a civilian, then you are not one of the good ones. GOOD COPS RESIGN.

And if you've considered all that I have written above, and seen all the insane footage of police beating up peaceful protesters, and you know full well that police officers have been getting away with heinous crimes (thereby UNDERMINING your beliefs in law and justice that you swear you uphold) and you still stand aside following orders, after all that you still feel the need to be an officer of the law then that's on you. It speaks volumes to your character and integrity as a human being. But from here on out I will proclaim FUCK THE POLICE and that includes you too. 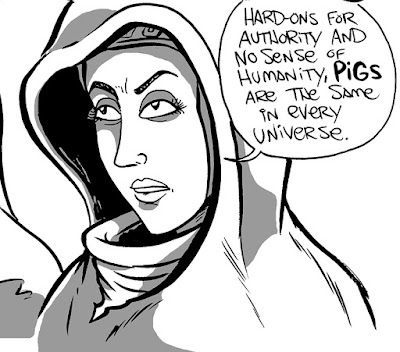