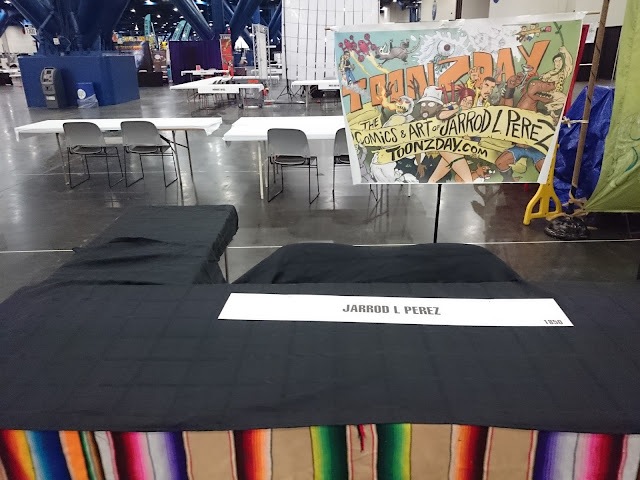 Comicpalooza blasted through this year even bigger than the year before spanning from one wall of the convention center to the other, and it was a buffet for the senses. So much to see, look, and gawk at. Somehow I felt more distracted at this show than ever, and it didn't help that half the people were in costume. But don't get me wrong, that's not a complaint. The dealers room was pretty, pretty gnarly in sprawl, so much so I didn't come close to making it to the other wall. That and I didn't make it past the light saber booth. Still, Comicpalooza is always a fun show, and I'm so glad it's grown so big so fast. Goes to show how much a demand we have for geeking out here in the H.
Meeting fans and plugging my new book is always a cool time. This year's commissions were all pretty diverse and had to flex some nuts on a few. As the yearly tradition goes here are my favorite: 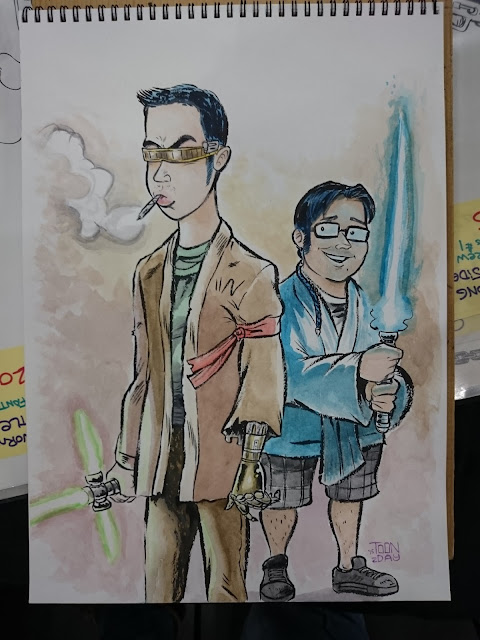 Jedi selfie with my apprentice Lenin Roman, who's shaping up to be a righteous comic artist in his own right.

"Geez whiz, Master! What are you gonna teach me today?"

"Today, Padawan? Sheeit, how to roll a proper death stick." 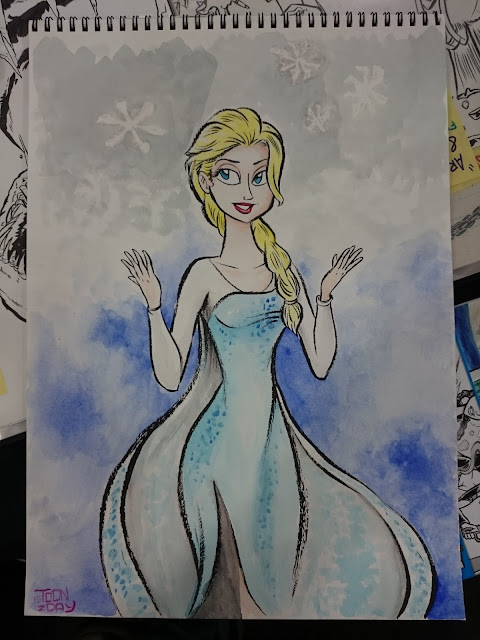 You know who, and if you don't I envy you. 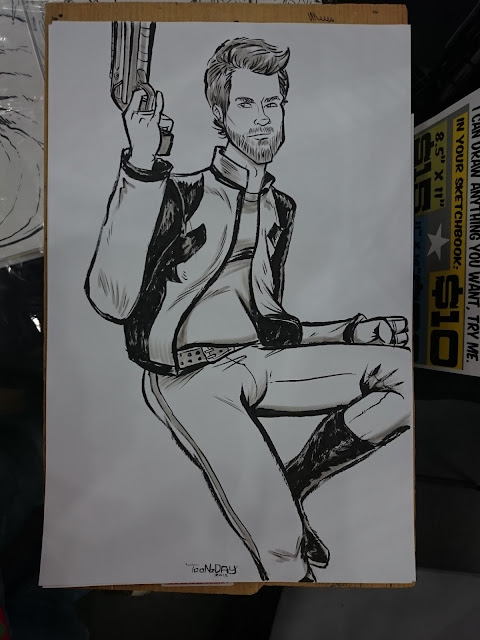 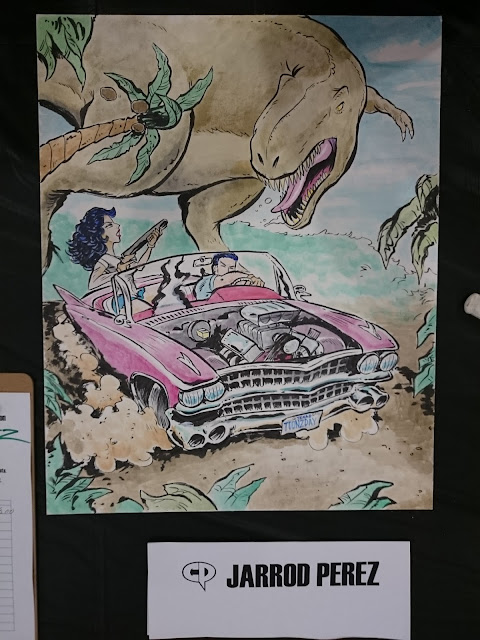 My live art auction piece, something outta Cadillacs & Dinosaurs or Xenozic Tales if you're hip like me. 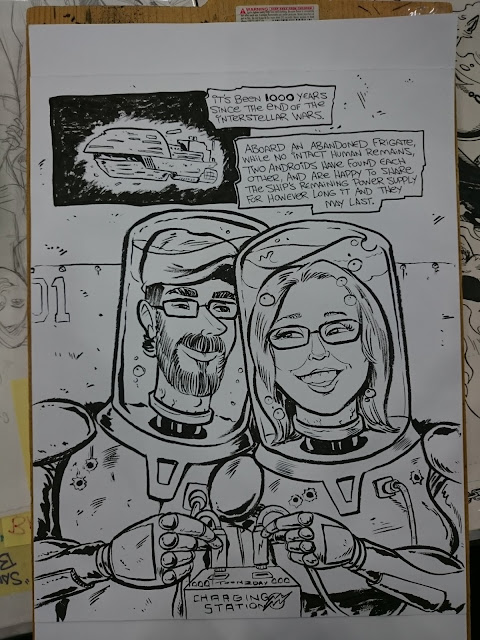 a couple wanted a commission with their faces, bodies and/or setting was Artists' Choice. I was stumped with this one, and after wracking my brain on what to do I did this for 24 hours I decided to go with  futuristic android characters. But I thought the android/glass helmet bodies would be too dull on their own so I wrote in a scenario. This commission is also a veritable comic page. 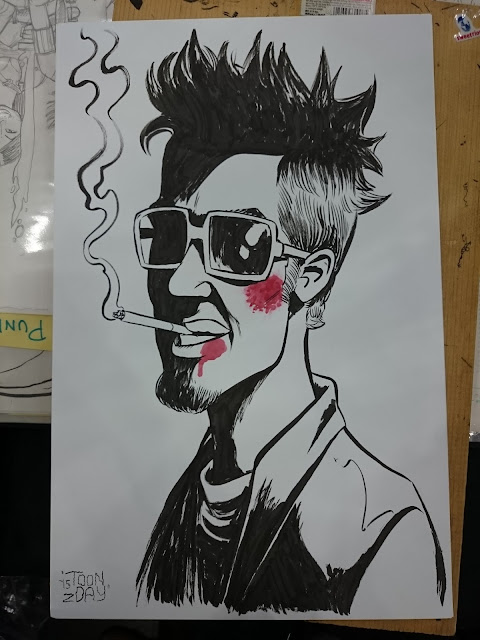 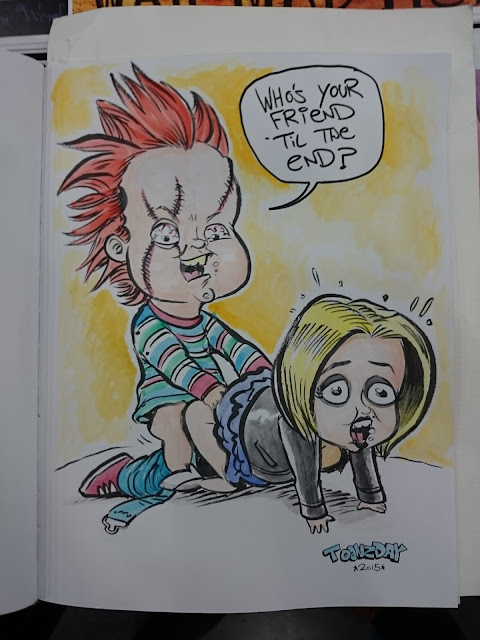 for an all Chucky sketchbook, a memorable scene from the series.

What. They're dolls. Stop trippin. 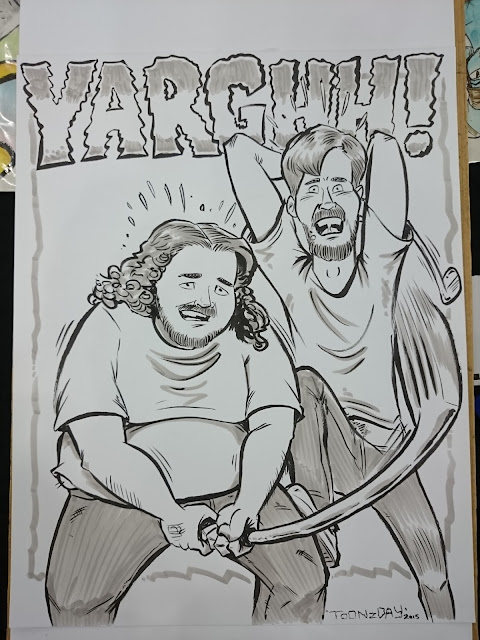 from the TV show Lost, these two guys are creating a distraction.

Well, soak it all in. Between work and all the other stuff I'm into it's tricky to constantly keep creating post-worthy stuff.  I know I don't post a much as I should, and keep in mind I do keep doing work that is client confidential. But I do strive to keep this site up and entertaining.
Good news is I'm beginning new work for Screw Comics 4. Just possible story concepts, and playing around with characters. The ball is rolling on that. I've been developing other stories and series as well. Extensive, long-comic-series-stories. I've also rummaging through  my archive of unpublished stuff, such as the Enchanted by Darkness one-issue off-shoot. It's my first comic I drew with the brush technique I currently use so I'm debating going through and reworking some of the panels (which is strange cuz usually when I'm done I'm done).
So plenty is in the works. Get ready for a long hot summer. 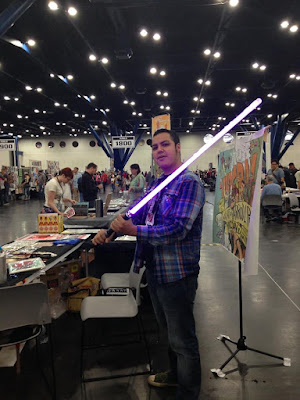