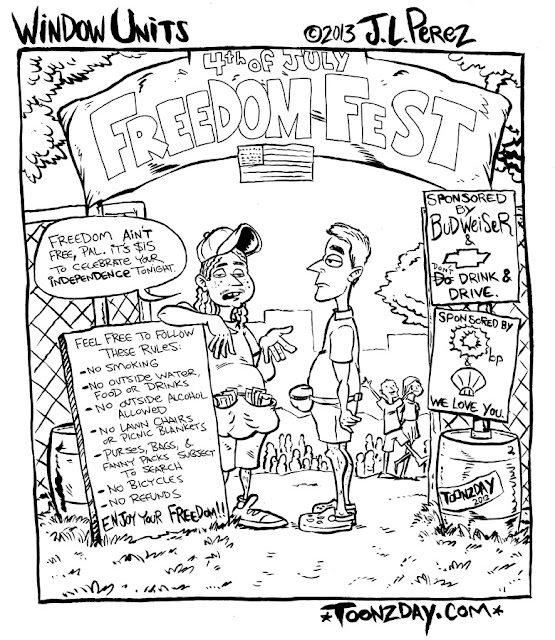 I love my country, I just think we have a bunch of stupid rules that, ironically, impede on our freedoms. Take a look around, they're everywhere. You don't really notice them until you want to do something and there's another thing blatantly telling you YOU CAN'T DO THAT.
Among the freedoms we do take for granted is the freedom to get upset over shit and cause a ruckus. Half the rules we have in place is because somebody got hurt, offended, or just plain scared and they raised a fuss and perhaps a lawsuit came into play, and now we have rules to prevent such measures from happening again. Some people think that strong rules and scary laws will take the place of common sense, that once enacted people just won't do it (pro-lifers and pro-drug law peeps, I'm looking at you). Not so. One thing I've learned is that people do what they want to do regardless. It's just if you have rules enacted against what they want to do somehow the safety of what they want to do decreases. Think about that.
So, instead of shelling out $15 for a corporate 'Freedom Fest' maybe we all should buy some fireworks and celebrate our country's freedom by blowing up a small part of it.