The latest from Jerry Carrillo, new poster for his upcoming show this September 21st at Bohemeo's, right here on the east end of Houston. The show, Ignorant Bliss; he provides the idea and title, I provide the visuals. Here's what we came up with. click to see detail. 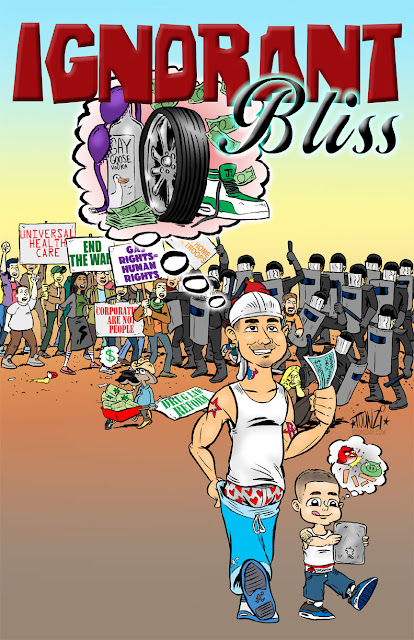 Basically, it combines current hot-button issues and political climate with today's materialistic, shallow youth, or shallow people, for that matter. Jerry told me the title last week and ever since then I envisioned a saggy-pants'd, do-ragged youth having delusions of grandeur, oblivious to the world on fire all around him. It was also important to depict a healthy young man, someone who can physically get involved with his community if he so chose to 'open his eyes'. As with most of the Jerry Vision work we always throw in a nod to his son, which explains the kid. But it also hits you with the notion that this man is also a bunk parent, choosing to pacify his son with cheap entertainment rather than talk to him. Among the 'ignorant thoughts' the man is thinking of is the played out subject matter of commercial radio rap today. And he intends to obtain his wants with...*sound the fanfare*....his unemployment check.
We wanted to fill the protest signs with the hot topic wedge issues of the day. A lil' piece of trivia: the 'Drug Law Reform' sign on the ground is a symbol for the dearth of drug policy talk from both parties during this election year. And the rat is a nod to that lack of talk reminding everyone of how lucrative the drug market is here in America at this time. Look at him go, a wheel barrow full of mexican-grade shwag to peddle out to the delusion-ed people of America, like our main character right here.
That about covers this show's design. On another note, it's my last day in my twenties. Oh boy, it's been a helluva ride. I remember how crucial it felt when the time was ticking on the 19, how I encompassed this feeling that would no longer be a teenager. Being 20 sucked, though. Not a teen anymore yet, not eligible to drink either. A sort of veritable young adult limbo. The realization that I'm turning 30 is not so bad. Not bad at all actually. Sure, I'm not where I thought I would be 15 years ago, hell, even 10 years ago. But, I'm still moving forward, still evolving. In a sense I'm just getting started. 30 is still young. Ain't it the new 20 or something?