Comicpalooza came and went. This year was their biggest show yet, taking up most of the third floor at the GRB. They also tried a new design for their Artist Alley as well, a format I dubbed "The Maze." It was basically one route and it snaked up and down until you found your way to the end. Unfortunately, I don't think this format worked out as well as originally intended. What was designed so that everybody gets some shine from con-goers, had an opposite effect. A colleague described it as leading the cattle to slaughter. It was a very risky move on the convention's part which resulted in quite a few artists, even the more famous ones, to not do as well as they had hoped. Yours truly included. I did much better last year. Also, the convention, I think, had bigger names come out last year as well. But don't take this the wrong way. I will be at Comicpalooza next year because I support the idea of Houston having a huge comic show. Hopefully, the promoters will learn from the results of this maze idea and revert back to the traditional method of laying out Artist Alley.
Big Thanks to everyone who came out and bought comics and said hello and took business cards. You made the weekend that much more enjoyable. And big shouts to Dirk and the fam, who stayed with me for the week until Comicpalooza, and the whole Dallas trip. It was fun! Sorry I didn't feel like hangin out on the last day, I came down with accute case of an upper respiratory infection...you know how that goes. And an extra special shout to my lovely assistant, Annette, who helped me man the the table this year.

Here are some live art flicks: 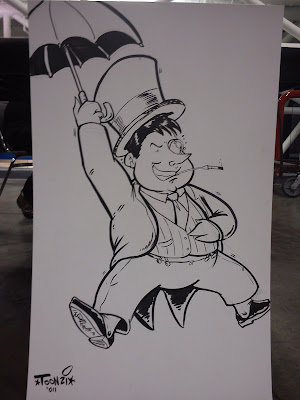 Here's the penguin, taking a leap. 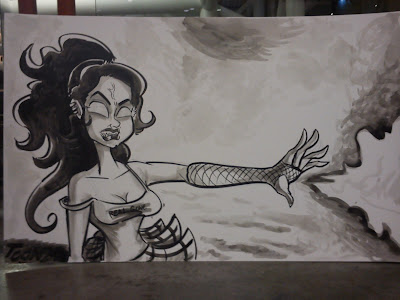 Jade from Enchanted by Darkness. 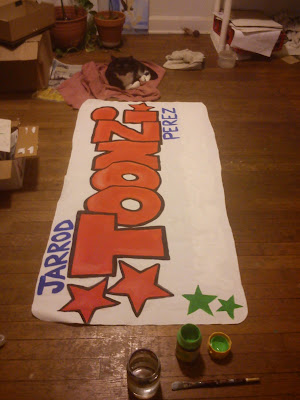